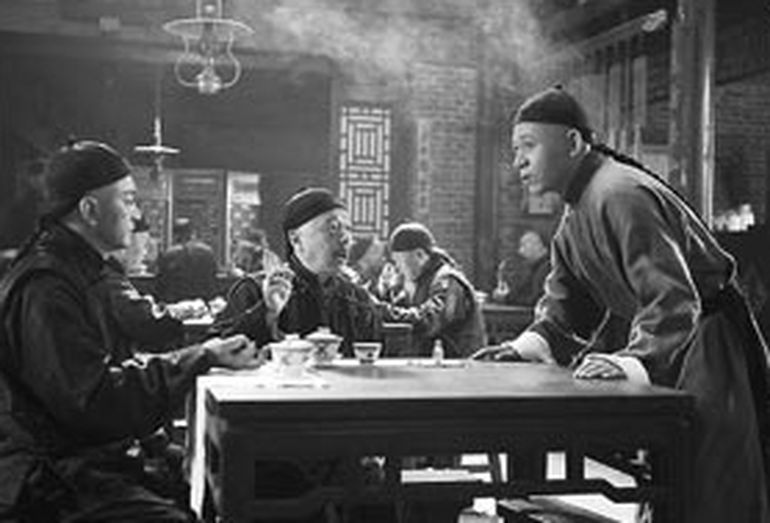 The play uses the political upheavals of the years 1898, 1918 and 1948 as the background for the three acts respectively, but talks little about politics.
With more than 60 characters, it portrays a shrewd, sometimes selfish sometimes kind-hearted "Yutai Teahouse" manager Wang Lifa; an upright Manchu bannerman who is arrested in the first act and later becomes a vegetable seller; a rich young man in 1898 who is broke by 1948; and a 15-year-old girl who is sold to an eunuch in the first act and then later works in the teahouse.
Other characters include a fortune-teller and opium addict, a professional pimp; the eunuch who wishes to take a wife; and secret police agents. As the play progresses, the main characters grow old and their lives change, while other characters either die or are killed. The sons of some of them carry on their fathers' vices, such as the pimp's son who finally gets hold of the teahouse and is ready to make it a base to administer the city's prostitutes.
The Teahouse is a perfect place to meet friends, discuss news, do business...All social classes are reprezented and all opinions are being discussed. It is a sort of microcosmos of society, revealing all things.
Xie Tian has done an incredible adaptation of Lao Che's drama play. The drama player Yu Shishi is a perfect teahouse owner.
Published in Movies
Tagged under

More in this category: « Hava, Maryam, Ayesha Just Like That »
back to top